Why You Need To Watch These 5 Key Earnings Reports: S&P 500 Futures 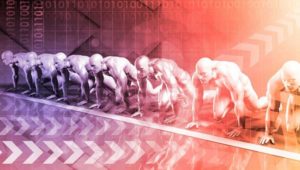 Citigroup and Dow component UnitedHealth Group are near buy points, with caveats. CSX is the first rail operator to report this week, while Interactive Brokers precedes Charles Schwab (SCHW) on Wednesday. Citigroup and super-regional Comerica kick off a new wave of big bank earnings.

The No. 1 U.S. insurer reports before the opening bell Tuesday. The Dow component’s revenue is expected to show an 8.4% gain to $51.5 billion as earnings swelled 19% to $2.51 a share. That’s the analyst consensus according to Zacks Investment Research.

UnitedHealth is in a flat base with a 231.87 buy point. Shares closed Friday at 228.64, about 1% off that entry. But the relative strength line, with tracks the stock’s performance vs. the S&P 500 index, has been lagging since the end of November, actually hitting a consolidation low on Thursday.

Ideally, a stock’s RS line (the blue line in the charts below) should lead or confirm a breakout.

A strong breakout could push the RS line to at least a short-term high over its pseudo-handle. Flat bases do not have handles, and this brief pause was not long enough to qualify as a handle in any other pattern, but it’s still something for the RS line to try to top.

UnitedHealth also is the first managed-care company to report for the latest quarter, with several in or near buy zones. Anthem (ANTM) and Cigna (CI) moved into a buy zone Friday, joining Humana (HUM), though none of the breakouts came on impressive volume and their RS lines continue to lag. Aetna (AET) and WellCare Helath Plans (WCG) are near buy points but with lagging RS lines.

Citigroup has a flat base that’s a half-step above a prior flat base, which was just above yet another flat base. The buy point is 78.02. Shares rose to 76.84 on Friday.

But Citigroup, which outperformed the RS line from early June to early October and generally outperformed rival banks over that span, has had a declining RS line since then.

Comerica shares have risen 7.2% in January and are well extended from any buy point. The stock’s RS line has been rising for the past four months.

Rail giant CSX delivers Q4 results after Tuesday’s close. Analysts expect a 14% advance to 56 cents even as revenue slides 5% to $2.88 billion. This is the first report after CSX named James Foote CEO in December following the death of veteran railroad exec Hunter Harrison.

CSX’s stock is modestly extended from a 55.09 buy point. Shares briefly tumbled on news that Harrison was taking a leave of absence followed quickly by his death, but shares didn’t fall quite enough to invalidate the buy point. Also, shares found support at their 200-day line and never closed below their 50-day.

CSX’s RS line initially confirmed the Nov. 30 breakout. But the RS line hasn’t made headway since then, and has generally been lagging for more than six months.

Interactive Brokers reports will issue results late Tuesday. Revenue should more than double to $399 billion with earnings sprinting to 39 cents a share vs. 7 cents a year ago.

Shares cleared a short consolidation last week, hitting new all-time highs. The RS line is not quite at record levels, but rose sharply from the end of May through early December.

Charles Schwab is expected to report earnings on Wednesday.