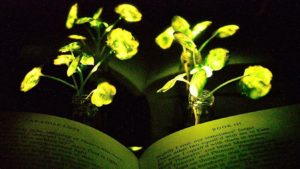 The connection between people and plants has long been the subject of scientific interest. Recent studies have found positive effects.

A study conducted in Youngstown, Ohio, for example, discovered that greener areas of the city experienced less crime. In another, employees were shown to be 15% more productive when their sparse workplaces were decorated with houseplants.

The engineers at the Massachusetts Institute of Technology (MIT) have taken it a step further — tinkering with the actual composition of plants in order to get them to perform diverse, even outlandish functions.

These include plants that have sensors printed onto their leaves to show when they’re short of water; one that can record and transmit 3D images of its surroundings; and even a plant that can detect chemicals used in explosives in groundwater.

The prototypes fall into the nascent discipline of “plant nanobionics,” a research area — and term — devised by MIT’s Strano Research Group.

The term combines two concepts — “bionic” which means to give a living thing an artificial capability (like a bionic arm), and “nano” which refers to particles smaller than 100 nanometres that can be used to imbue the living thing with its new capability.

“We’re thinking about how we can engineer plants to replace functions of the devices that we encounter every day,” explained Michael Strano, a professor of chemical engineering at MIT, in a phone interview.
“The things that we make out of plastic and circuit boards — can we replace those with a living plant?”

One of his latest projects has been to make plants glow in experiments using kale, watercress, rocket and spinach. By embedding nanoparticles into watercress leaves, Strano’s team found that they could create a faint light for three-and-a-half hours.

In the study, the leaves were first immersed in a solution of nanoparticles and then exposed to high pressure, which induced the particles to enter the leaves through pores called stomata.

Once inside, the nanoparticles released luciferin, a light-emitting compound, and luciferase, an enzyme that works on luciferin to make it glow. In this way, the light was powered by the metabolism of the plant itself.
“Plants harvest energy from the sun and stores it as sugar inside the plant,” said Strano. “What we’re doing is taking some of that stored chemical energy and diverting it into illumination.”

The light, about one-thousandth of the amount needed to read by, is just a start. The technology, Strano said, could one day be used to light interiors or even to turn trees into self-powered street lamps.

In the future, the lab hopes to develop a version of the technology that can be sprayed onto plant leaves or saplings in a one-off treatment that would last the plant’s lifetime. The engineers are also trying to develop an on and off “switch” where the glow would dim when exposed to daylight.

Glowing plants could one day be used to light interiors.

Lighting accounts for about 7% of the total electricity consumed in the US. Since lighting is often far removed from the power source — such as the distance from a power plant to street lamps on a remote highway — a lot of energy is lost during transmission. Glowing plants could reduce this distance and therefore help save energy.

But the primary motivation, Strano said, is not saving the planet one illuminated leaf at a time, but rather, aesthetics. “I want to make them, first and foremost, because they’re beautiful.”