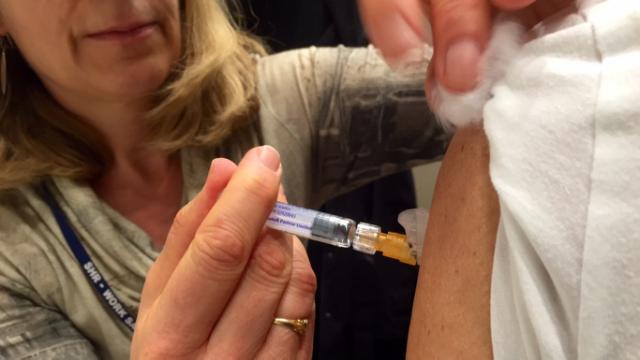 New data from the federal Health Department shows flu activity is high and continuing to rise in Canada, with more than 15,500 cases confirmed compared to about 9,000 this time last year.

In Nova Scotia, there have been 72 lab confirmed cases of the flu and one influenza-related death this season.

“In Nova Scotia, we’re at the beginning of the six to eight week period of intense flu activity,” said Dr. Robert Strang, the province’s chief medical officer of health.

Strang says in the last two to three weeks, there has been a steady increase in the number of people going to hospital with flu-like symptoms.

There have also been several outbreaks of influenza in long-term care facilities since Christmas.

“There are significantly more [cases] than last year,” he said, “But we’re still within the range of normal.”

Strang says the rise of the H3N2 strain across the country is likely to blame for the increased number of infections.

“[H3N2] tends of produce more severe disease, especially in the elderly. We know historically that the vaccine that’s produced against that strain tends to be less effective,” he said.

The influenza B strain is normally less severe and usually doesn’t spike until the end of the flu season.

“It may be contributing to an increased number of cases right now, because with two strains circulating, the same person could get influenza A and influenza B,” he said.

“It might also mean that our flu season will end sooner … but only time will tell about that.”

Not too late for flu shot

Even though the flu season is in full swing, Strang says it’s not too late to get the flu shot.

While it can take up to two weeks to get full immunity, Strang says you start to develop immunity right after you get the shot.

“The flu season lasts for six to eight weeks, so we’re still going to have lots of flu activity late February into March,” he said.

“Even though we know it’s less effective than normal … it’s still better to have some protection rather than no protection.”

PrevPreviousHow to Retire as a Millionaire Using Only a TFSA
NextIncreasing minimum wage puts money back into small business economy, says labour expertNext