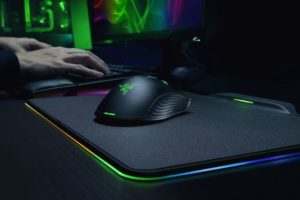 If you’re in the market for a new mouse to dominate opponents or simply wow your co-workers, the Consumer Electronics Show is a great place to see what is coming soon.

Here we list the best mice at CES 2018, all of which target the PC gamer. Manufacturers range from Cooler Master to Mad Catz to Razer, some of which provide their own take on Logitech’s wireless charging solution that hit the market in early 2017.

Cooler Master’s upcoming mouse is unique because it includes a “hidden” D-pad under the thumb consisting of four, low-profile buttons. Perfect for MMOs and MOBA games, your thumb will never need to leave the surface as it maneuvers to all four buttons: Just “rock” your thumb up, down, left, or right for actuation. These buttons are configurable through the company’s desktop utility.

In addition to assigning D-pad commands, the software can be used to assign functions to the wheel, customize the RGB illumination, and set the DPI levels ranging up to 24,000 dots per inch. The “durable” PBT chassis also plays host to a built-in OLED screen with a 96 x 94 resolution so you can add a team logo or unique design directly to the mouse itself. This screen is presumably programmable through Cooler Master’s desktop software.

Corsair’s latest gaming mouse may have a “dark core” label, but it’s an illuminated mechanical rodent at its roots supporting four customizable RGB zones. The device relies on the PMW3367 optical sensor promising sensitivities between 100 and 16,000 dots per inch. This sensor is joined by nine buttons you can program through Corsair’s desktop software. Other features crammed into the Dark Core RGB include a one-millisecond report rate, onboard memory for storing on-the-go profiles, and a built-in rechargeable battery promising up to 24 hours on a single charge.

That said, the SE model supports the company’s new Qi wireless charging station, the MM1000, that is similar to Logitech’s PowerPlay setup. But what makes Corsair’s version different is that it will charge any device that supports Qi wireless charging. For devices that don’t support wireless charging, the station provides Micro USB-B, USB-C, and Lightning Qi adapters. The MM1000 doesn’t appear to provide wireless 2.4GHz connectivity, requiring the mouse to use the USB pass-through port, or a Wi-Fi dongle plugged into the parent PC’s USB port.

The latest gaming mouse from HyperX relies on a Pixart 3389 optical sensor with a sensitivity of up to 16,000 dots per inch. Slated to arrive sometime within the second quarter of 2018, it will rely on OMRON switches mounted under the left- and right-click buttons, promising a duration of up to 50 million clicks. These buttons are joined by a programmable mouse wheel, two buttons located on the left seated under your thumb, and a DPI toggle.

According to product shots, the mouse will support RGB illumination in the HyperX logo, and in a single LED strip that runs along the sides and across the front. Gamers can customize the lighting using the company’s NGenuity software along with assigning macro commands to any button. Given the mouse won’t be released until the next quarter, HyperX was rather light on details, but we should know more about the hardware once we move out of March.

Guess who’s back? Mad Catz made a return to PC gaming peripheral with the launch of several products, one of which is this dot-infested optical mouse. It relies on the Pixart PMW3360 optical sensor supporting sensitivities up to 12,000 dots per inch and an acceleration of 50g. The sensor is backed by 10 programmable buttons presumably customized through the company’s desktop software. Unfortunately, there is no sign of any RGB illumination on the mouse itself, but the included playing surface sports an RGB running along its edges.

Taking a cue from Logitech, the big selling point is the Air’s bundled playing surface. It wirelessly recharges the mouse using the latest “capacitor” technology as long as the mechanical rodent remains on the surface. Other notable features you will find in the entire bundle include OMRON switches used with the left- and right-click buttons, four USB report rates, a switch durability of up to 20 million clicks, and a movement speed of up to 250 inches per second. A USB cable is thrown into the mix if gamers prefer a different mouse mat.

The HyperFlux aspect in the new peripheral’s name stems from the embedded wireless power technology. There’s supposedly no battery involved — the technology creates a magnetic field that transfers power directly to the peripheral. It’s somewhat similar to Logitech’s current PowerPlay setup where the mouse must reside on a special mouse mat-like station to receive a continuous charge. What’s unclear is whether the mouse requires a separate wireless dongle plugged into the parent PC for connectivity or if the charging station provides a wireless feed.

Speaking on connectivity, this mouse relies on Adaptive Frequency Technology that will scan and switch to the best 2.4GHz channel for the optimal connection. Other features include an optical sensor supporting a sensitivity of up to 16,000 dots per inch, customizable RGB lighting, and a right-handed design. The charging station, dubbed as the Razer Firefly HyperFlux, is included with the mouse. Firefly provides two optimized mats in the bundle: One hard (speed), and one soft (control).

Now this is interesting: The Rival 600 sports two optical sensors, not just one. The main Pixart sensor, dubbed as the TrueMove3, does all the main work while the adjustable, secondary sensor tracks liftoff distance. Why? According to SteelSeries, this dual-sensor “TrueMove3+” setup will help reduce jitter and “cursor disparity” associated with lifting the mouse too far from the surface at the wrong times. You can adjust the liftoff detection down to just a mere 0.5mm.

As for other bells and whistles, the mouse provides a sensitivity of up to 12,000 dots per inch, 256 different customizable weight and balance options, a trigger system designed for the left- and right-click mouse button mechanical switches, a dedicated 32-bit ARM-based processor, and onboard storage for saving your button assignments and lighting effects to use during software-free events. There are even eight RGB lighting zones on the mouse you can customize using the company’s desktop software.

PrevPreviousDividend Investors: These 3 Stocks Are Taking Off!
NextJay Leno: Here’s the fastest way to become a millionaireNext