Earnings Season On Tap: Here Are The 3 Top Sectors

Earnings for the second quarter kick off in earnest next week with JPMorgan Chase (JPM), Citigroup (C) and Wells Fargo (WFC) on the docket. Early indications point to another strong season.

S&P 500 companies are expected to report 8% earnings growth on a 4.6% gain in revenues, according to Thomson Reuters I/B/E/S as of July 6. That’s a big reversal from a 2.1% profit decline in Q2 2016 as the energy-led earnings slump extended to a fifth consecutive quarter. And it solidifies the comeback that has seen S&P 500 profit growth of 4.3%, 8% and 15.3% in the last three quarters.

Apple (AAPL), which has returned to growth in the prior two quarters, should continue to show EPS and revenue gains when it reports on Aug. 1. That’s despite many consumers awaiting the Apple iPhone 8 later this year. Due to its massive size, Apple has an outsized impact on overall S&P 500 earnings and especially the S&P 500 technology sector. Facebook (FB) and Google parent Alphabet (GOOGL) should see fat profit gains.

That 8% overall earnings target for the second quarter is down 2 percentage points from the start of April, but that’s half the usual four-point cut typically seen.

That is fueling optimism on Wall Street that Q1’s momentum — which saw earnings growth hit its highest level since 2011 — will continue into future quarters.

“There is a lot more confidence in what is expected for Q3 than at this time last year,” Sheraz Mian, research director at Zacks Investment Research, told IBD.

One downside to the modest revisions: The markets may already be pricing in strong results. Investors have been taking profits in leading tech stocks over the past month.

Profits and revenues have been robust from the roughly 5% of S&P 500 companies that have reported Q2 results so far, including Nike (NKE), Adobe Systems (ADBE) and Oracle (ORCL). Of those 23 companies, 78% have beaten EPS estimates and 87% have topped revenue forecasts. 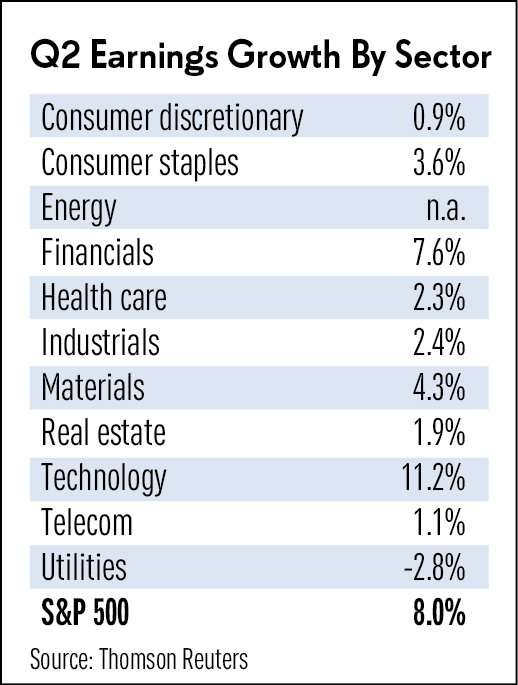 The energy, technology and financials sectors are expected to drive earnings growth in Q2 — a period over which the S&P 500 advanced 2.6% and set a new all-time closing of 2,453 on June 19.

Oil and gas companies earnings should reverse higher after an outright loss a year earlier. But oil prices are down significantly from the start of 2017, which has hurt shares of Exxon Mobil (XOM) and other energy stocks.

Financials and technology, the two largest S&P 500 sectors, are expected to moderate earnings growth from the near-20% Q1 pace. But growth should still be solid, with financials up 7.6% and technology 11.2%, according to Thomson Reuters.

Several Wall Street giants have warned of weak trading revenue in Q2, continuing the lackluster trend in 2017. That’s a key reason why JPMorgan and Citigroup are expected to show little-to-no profit growth, while regional banks such Comerica (CMA) should see big EPS gains.

Still, bank stocks large and small have been leading in recent weeks, helped by higher bond yields and massive buyback and dividend plans. JPMorgan Chase and Citigroup have moved past buy points to long-time highs, while Morgan Stanley (MS), Bank of America (BAC) and others are in buy zones.

Technology is the only sector outside of energy that is expected to best the overall 8% S&P 500 gain. The sector also has gotten a boost from Adobe, Oracle and Micron Technology (MU), which smashed quarterly expectations in late June, Mian said. Expect strong growth for Alphabet and Facebook, he added.

The utilities sector should post a 2.8% earnings decline. Of the 11 S&P 500 sectors, only industrials has seen an upward estimate revision for Q2 since the start of April.

Zacks, which tracks sectors differently, expects aerospace, construction and industrial products to shine, with earnings growth of 49%, 15.6% and 11.9% respectively.

Multinationals such as Apple, Boeing (BA), Microsoft (MSFT), Alphabet and Facebook, are expected to see less drag from a strong dollar on their earnings.

“The dollar was only 4% higher year over year in the second quarter on average, so we don’t expect a major impact to earnings because of that,” said Lindsey Bell, a CFRA investment strategist. The greenback’s continued weakness since then should provide a tailwind to multinationals’ Q3 earnings.

“A dividing line in the last earnings season was that more internationally oriented companies had a more positive view of business than those that are domestically oriented,” he said. “I expect that trend to continue.”

The first quarter saw double the growth pace that was expected at the start of the reporting cycle — and that is unlikely to be surpassed for the next few quarters, in Mian’s view.

PrevPreviousAlibaba (BABA) Proves Again That it is “The Amazon of China”
NextAre sports supplements ‘a big rip off’?Next